“Wings? You want wings? We have wings! There are three types here: May Fly, Caddis and Stone Fly. All are made in the same way – a pre-cut shape on a backing sheet, all printed with details that suggest the natural wing. May Fly and Caddis come as pairs, Stone Fly as two separate wings. All have a matt surface facing out and gloss on the side in contact with the backing card.

These are made from tough stuff, too. I can stretch it until it breaks, and it’s difficult to cut with thread. These look like stiff wings but this is actually quite supple plastic. It’s difficult to explain what I’m getting at here, but the texture of this plastic seems to work well; they hold position or posture well but are ‘squashy’: easily gulped by a trout.

These are not just copies of wings the shapes have been thought out for tying. What I mean is I could simply tie over the narrow point where the May Fly wing pairs meet; I can but I don’t have to, because I can tie down the wee tabs on either side of that narrow strip. Similarly, both the Caddis and Stone Fly have short level stumps or stubs where I want to tie them in. Tying in the tabs and stumps takes a minute or two of practice, but it’s not hard and the wings are resilient so if they roll around or otherwise misbehave just remove the thread and start over.

I found sizing slightly problematic. I guess that comes from the styles of flies I tie and being more used to tying with natural materials. When I come to proportion a fly I work to the hook: the tail, body, wing and hackle are all sized using the hook as my reference. By contrast, these wings are precisely pre-cut and I’d rather not start butchering them, so do I have to find a hook the right size for the wing? I was sent medium-sized wings – the photograph shows a pair mounted on a #10 Fine Dry Fly G-Point. It looks big to my eye, and I regard #10 as a fairly large dry fly hook.

No, I don’t need bigger hooks. In fact, that approach really misses the point and purpose of these wings. Far from needing something bigger than that #10, I should probably use a smaller, or at least shorter hook, and fit a detached body. The point being, these materials come from a different mind-set and way of tying. Some of my old habits, using the hook as my reference adjusting proportions to suit, will have to go if I am going to get the most from these.

OK, so how do I size flies tied with these wings? How do I fit the parts together? I suppose I could get medium wings and medium detached bodies and just fit the two together – but again that misses the point. These are designed to be used with the insect, the natural bug, as the reference. If I know the rough length and colour of a dun’s body and the height of its wings I can fairly quickly choose a suitable detached tube body and wing pair.

Contrast that with our traditional methods of tying flies – give me the dressing notes for an Adam’s or a Lunn’s or a Kite’s Imperial and frankly I can tie a decent version of that artificial fly without having the least inkling what a natural fly looks like. If fact, we can take that further, so for example, flies like Greenwell’s Glory, have taken on a life of their own – the debate over the original tying and the challenge of finding that exact ‘real’ Greenwell cape, whatever that means. None of those debates or challenges, interesting though they might be, has the least hint of anything to do with entomology.

It strikes me that Hemingway’s wings and tube bodies (featured in a previous On the Bench) are part of a move away from that older type thinking and tying. Oh, and they make a pretty neat fishing fly, too!” 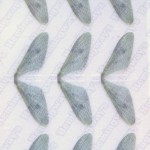 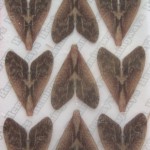 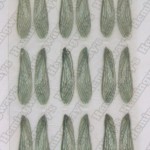