I am long time mountaineer and biker. I bikepack long distances on singletracks, gravel and dirt backroads. Always carry my fly rod and my tenkara with me.

I grew up in Europe, in Montenegro, Serbia and Bosnia and Herzegovina close to rivers Moraca, Sava and Drina. I was fishing from an early age but later focused on alpinism and became a registered alpinist. During 12 years of active climbing in Europe, I climbed in Serbia, Croatia, Slovenia, Bosnia and Herzegovina, Macedonia, Montenegro, Bulgaria, Poland, Slovakia and Italy. I made numerous alpine climbs and ski descents in BC, Alberta, Oregon and WA State. Participated in expeditions to West Buttress of Denali, Alaska and ski ascent of Mt. Logan, Yukon.

Bikefishing British Columbia opened another world to me. Biking and fly fishing rivers like Cowichan, Nitinat, Koksilah on Vancouver Island or Skagit near Hope, BC gives me a great joy. I want to share my trips with you as much as possible.

My love for the outdoors started from a young age in Southeast Pennsylvania. I grew up about 100 yds away from a river and I spent almost every day wondering its banks, turning over rocks and of course fishing!

My passion for the outdoors eventually led me to the small town of Telluride, Colorado in 2014, where I now reside and guide for my local shop, Telluride Outside. The staff there lit a fire under me and fueled my desire to learn more and seek out new areas to fish and work on every part of my fly fishing game, which is constantly evolving. I have grown to love fishing smaller creeks and high alpine areas that require greater effort to access, the more bushwhacking the better.

Aside from watching trout slurping down dry flies, the best part of fly fishing for me is the new areas it takes me and the people I meet along the way. As a guide, I live for watching people create memories on river and learn just how special every part of a fishery truly is. Being a part of someone catching their first trout on a fly rod is a memory they will carry with them for a lifetime, its only happens once and to be included in that experience is truly special. 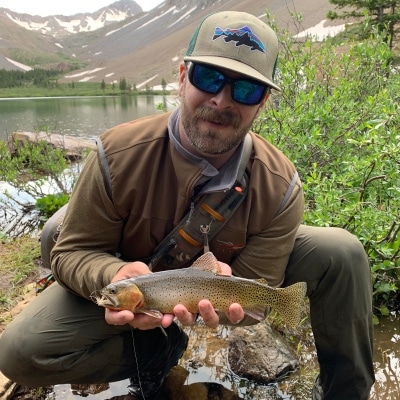 Fish Em LLC is a veteran owned fishing guide company that started out as a passion and dream. For over 11 years, Travis and Lori have been fishing the Kenai River in Cooper Landing, Alaska during the summer months and ice-fishing local lakes in Eagle River, and Mat-Su Valley during the winter.

A kid blessed to show people how to trick fish with a fly, respect nature, and rest in the Sierra Nevadas.

Let me introduce to you a place in the heart of Europe which soon became loved by many fishermen from all over the world. The Czech Republic, and especially its Šumava region, is not only a paradise for fly fishing lovers but above all a place with beautiful nature that will embrace you and never let you forget it. The Šumava National Park crossed by the Otava river, offers unforgettable atmosphere, which is one of the reasons why our clients like to return here. The articulation of the river and its variability brings many fishing adventures and provides what we fishermen like most – a possibility to restore peace of mind, merge with the nature and find oneself. This is one of the origins of the idea to build Hotel Annin close to the river and give you all you look for here. In cooperation with my brother David we will prepare a programme tailored to your dreams and show you the best places on our rivers. 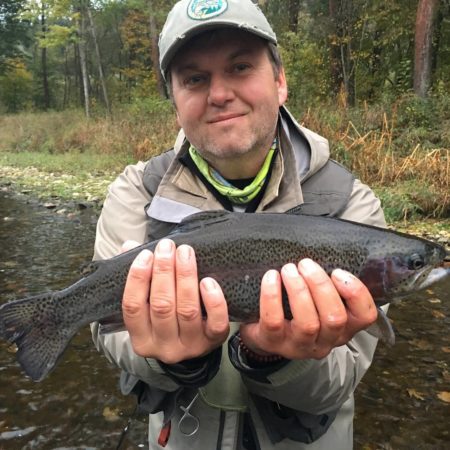 An avid fly fisherman and fly tyer for over 50 years. A master fly tyer with extensive knowledge of entomology. Dimitri's specialty are realistic flies. His favorite fish would be trout and Atlantic salmon. Dimitri has fished across Canada, United States and Europe. He is a member of the Izaak Walton Fly Fishing Club in Mississauga, Ontario. He has held a number of fly tying presentations demonstrating his skills and extensive knowledge of flies. When he is not by his vise, you can find him on one of the river banks of Southern Ontario.

Kevin is a self-taught fly fisherman and tyer currently living in Pittsburgh, PA.  His passion for all things fly sparked when he found his grandfathers old fiberglass rod and cork poppers at a young age. Summers of harassing local bluegill and bass has transformed into fishing and tying to follow the seasons, including steelhead, warmwater, predator, and trout flies. Kevin is currently the Content Director for Hatches Magazine, member of the Regal Vise Pro Staff, and scheming his next trip.

Front luxury log cabins with world renowned fly fishing guides at this specialty brown trout fly fishing luxury lodge.
River Haven Lodge is an “All Inclusive” lodge with a full breakfast and three course dinners served in the main lodge and a garden fresh healthy picnic lunch served on the river with your guide. Stop in the River Haven Private Bar after fishing for a cold drink and great bar food, as well. All is included in one price (even house wine and beer!), to put your focus on your main interest, to catch brown trout!

Scott Murray, better known as “The Trout” around the world has become famous in his own right as a renowned brown trout fly fishing Guide. He leads River Haven Lodge’s fly fishing team of Guides, considered to be one of the friendliest, and most experienced in the country! In River Haven’s Guiding Team, all our Guides have between 15 and 25 years of experience guiding for the Top of the South Island of New Zealand. Their experience and knowledge are beyond measure.

Przemysław Półtorak is a professional fly fishing guide located in Southern Poland. He started fly fishing as a child on the beautiful river Bialka Tatrzanska. He actively competes for Polish Fly fishing team. He is active in conservation of the southern Polish rivers and participates in many fishing programs on the Polish television. He is also an editor of the biggest magazine for Polish fishermen. If you would like to fly fish southern Polish rivers we would highly recommend using his professional fly guiding services and learning some Polish nymphing techniques.

‘Balkan’s Fly Fishing Paradise’ – your main fly fishing resource for this part of the world!

Musicarenje.net is the biggest and most visited web portal on the Balkans that is exclusively specialized in fly fishing. This is the place to go to for the information about rivers and streams of the Balkans, various fish species that can found here, flies selection, fishing licences, guiding services, fly fishing tours, fly fishing clubs, fly tying competitions and so much more. If you are planing a fly fishing trip to this part of the world – this would be your main resource.

My fly fishing and fly tying started in 1990. My passion in fly tying goes out to the realistic flies, including fishable and art flies. With more flies then I could ever fish with, I needed a new challenge in fly tying. I tried a few things like the classic salmon flies but could not get the satisfaction. Until I came up with the realistic fly tying, that was totally my thing, spending many hours on a single fly. It is to me a big kick to recreate a bug as good as possible. For some flies, I've spent more then 40 hours of tying, but when the end result is finished it gives me a great satisfaction.
I spend many hours behind the vise, tying is sometimes even more important to me then fishing. Every day I am behind the vise, trying new stuff and trying to improve my skills.

A top notch fly fishing & fly tying resource center! Here you can find the best fly fishing techniques, tactics and strategies. For fly tying tips, best fly patterns, countless ideas on how to use fly materials and choosing the right fly – Jim provides all this and more through his educational videos and articles.
Jim has been guiding on rivers and streams of Northwestern Pennsylvania for more than 20 years, Lackawanna River being his main water for guiding. He is the only guide in N.E. Pennsylvania with 40 years experience fishing the river. Weather it’s big brown trout, rainbow or mountain stream brook trout, Jim can fit a fishing trip that is sure to please!

An excellent resource for fly tying videos and instructions for all skill levels!

Tim Cammisa lives in western Pennsylvania and has been tying flies for over 25 years. His fly fishing has taken him all over the country, with his “home base” being in the State College area. Married to his wife, Heather, the two can be frequently found on outdoor excursions (both with and without their two dogs!). When not tying flies, Tim also spends some of his free time building bamboo fly rods. Tim started making fly tying tutorials on YouTube a few years ago, and has quickly grown an audience of 7,000 subscribers with over 700,000 video views. You can view those videos on his website, Trout and Feather.