“Hemingway’s Grayling leader uses fine monofilament nylon as the raw material. As with ‘laid’ ropes, once the furl is twisted together the ends need to be finished in some way to prevent them fraying. Hemingway’s has opted to loop both ends which does the job well and suits most fly fishers – it lets me loop onto the fly line and to my tippet.

Why use a tapered leader at all? Tapered leaders continue the job the taper at the tip of my fly line started. They make a smoother transition from thick, heavy line to fine, light tippet. Try casting a level fly line, no front taper, attached to a length of fine tippet, the loop forms in the fly line as normal but when the loop reaches the tip of the line it has nowhere to pass its momentum on to (thin tippet has insignificant mass) and the tip of the fly line kicks over – the tippet may straighten but more likely the tip of the fly-line will tug the tippet back so the leader lands in a tangled heap. Now try a fly line with a well designed front-taper and a tapered leader. The loop continues through the line, into the leader.

That’s the theory, and in practice it worked well with this leader. Listed as a grayling leader, I looped this to #5 and then #4 lines, and the Hemingway’s Furl seemed to me to prolong the loop and turn-over sweetly. This is a long leader (12ft) and I found myself a little hesitant about adding much more than 3ft of tippet but I’m sure as I got more confident with it I could cope with a longer tippet.

It is rather pleasing that this leader seemed to sit in the water surface more than on, where I would expect a mono taper to sit/float. I assume that was caused by the twisted surface of the furl. Mud sinkant sticks to the twisted nylon very easily indeed and took it though the surface film with ease. Although this leader turned over straight it does seem to want to relax into a slight zig-zag, I guess that’s because of the twisting but it is slight and, given I want a little slack between me and the fly, seemed very acceptable. 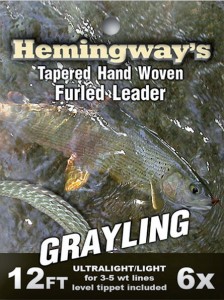